BTS member Jungkook aka Jeon Jungkook has removed all of his Instagram posts AGAIN. It seems JK aka the Golden Maknae of BTS was dissatisfied with the layout of his Instagram feed and hence, he deleted all of his posts about his visit to the White House and some random pics from the US. Jungkook is on a playdate with fellow members Jimin, J-Hope and American R&B singer H.E.R. aka Gabriella Sarmiento Wilson. Also Read – Prophet Muhammad row: Kangana Ranaut defends Nupur Sharma, ‘When Hindu Gods are insulted…’

Jungkook is one of the goofiest members and this is yet another PROOF of the same. He deleted his IG posts for the second time in the 50 hours probably. His last Instagram post feed had a unique pattern which included his posts from the White House and some black tiles in between. ARMYs had found the aesthetics impressive. However, it seems the Stay Alive crooner was not that satisfied with the end results. So, he deleted them all. Also Read – Koffee With Karan season 7: Samantha Ruth Prabhu completes shooting for Karan Johar’s show and you cannot miss these exciting details

Unlike the last time, Jungkook informed the ARMY and even asked them if he could redo the whole thing all over again. Jungkook was laughing out loud over the fact that he wanted to change it all again. And hence, he shared a meme-kinda clip from SK comedy show caller Comedy Big League. He posted the video twice. First, he captioned it by saying, “hahahahhahahahahhahaha, I thought my belly button was going to fall off but… But ARMY-nims! Can I delete and try again one more time? I want to make it prettier.” The second time he asked again, “Would it be okay to erase now?” check out the posts and ARMY’s reactions below: Also Read – Bade Achhe Lagte Hain 2: Nakuul Mehta resumes shoot after surgery; don’t miss his inspiring post 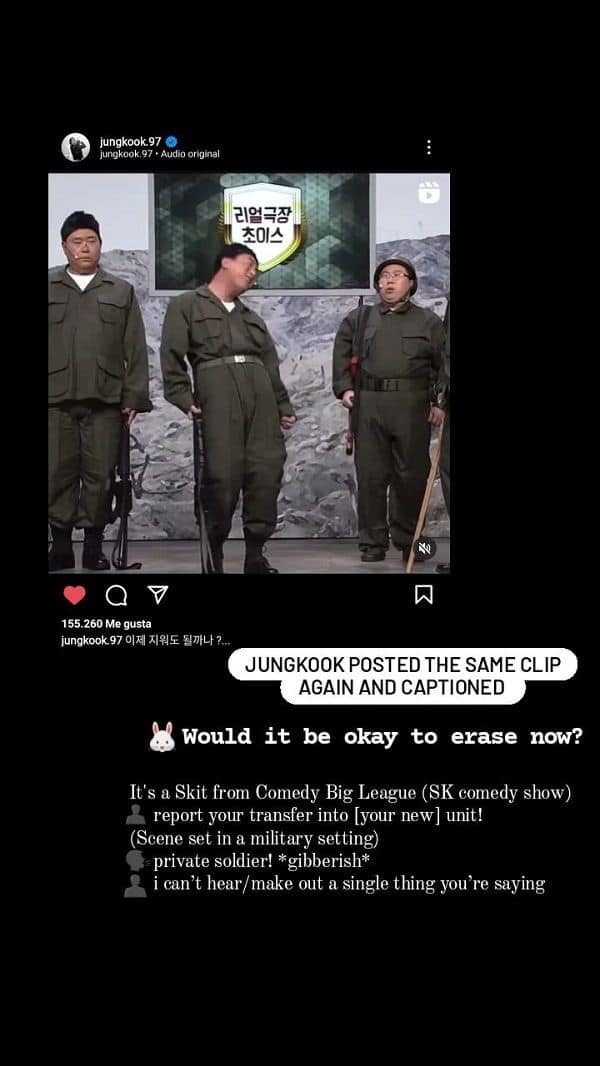 But ARMY-nims..! Can I one more time delete it (his IG feed) & try again? I want to make it even more pretty!!!

i just want instagram user jungkook.97 to know we have all had an existential crisis over the aesthetics of our instagram account before and if he needs support in the form of having his dick sucked, i’m here, willing, and available to be put on the next flight to his bedroom.

@BTS_twt #JUNGKOOK why?! You are killing me!! You had a beautiful instagram and now once again you eliminated everything? I LOVE your IG pic.twitter.com/hdiqqfI9Tj

Comedian Hwang Jesung who featured in the skit of the Comedy Big League was in shock on seeing himself on Jungkook’s now-deleted post. He thought that the staff was tricking him when he was shown the message and Jungkook’s post. He gushed over Jungkook and claimed to be an ARMY as well. Check out his post here: 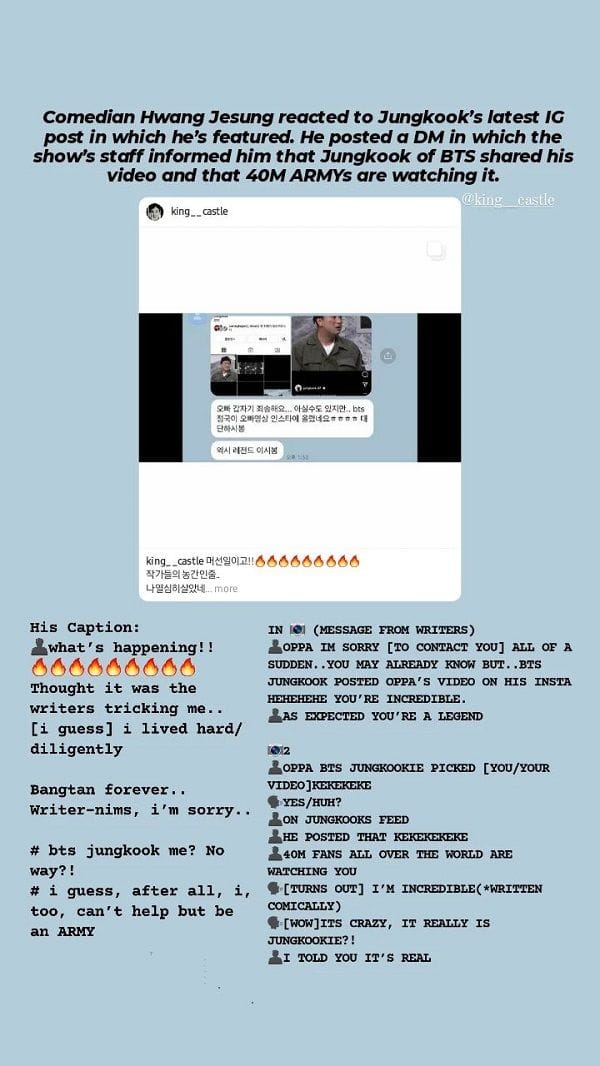 Jungkook goes on a playdate with Jimin, Hobi and H.E.R.

Jungkook meanwhile went on a play date with fellow members Jimin and JHOPE. American singer H.E.R was also with them. They are in the Timezone. H.E.R. tries her hand at the boxing game while Jimin and Jungkook cheer on her. Hobi, as usual, is behind the camera. Hobi also shared a video of Jungkook and Jimin playing basketball in the Timezone/GameZone. Check out the video here:

BTS will be dropping their anthology album Proof on 10th June. The promotional campaigns are run by Big Hit Music on BTS’s official handle as a group. The album includes three CDs that include previous songs revisited, some demo versions of the songs and five new tracks. ARMY’s are looking forward to creating new records with the new album release.

BTS CONFIRMED to have a concert in October in Busan for World Expo promotion; ARMY is tripping hard over the news [VIEW TWEETS]

Kylie Jenner and Travis Scott are already preparing their baby to be an athlete; we wonder what 3 Idiots’ Rancho would say [Deets Inside]