Mandana Karimi dropped a fun video of her wearing hijab as she is shooting for something special. The Lock Upp took to her Instagram and posted a video her twerking in the burqa and this action of Mandana has left the netizens fuming and they have been strongly slamming her for this act. One user slammed her and said, ” Don’t make fun of hijab”. Another user wrote, ” I you wanna do such things do f##kn things without wearing burkha. Respect it no body stoping you for such things but have some sense”. Another user slammed her and wrote, ” You should be ashamed of yourself.. being a muslim you are making fun of hijab shame on you i think you know that how disrespectful act you did”. ” Shame! Do not disrespect hijab like this. Atleast, think once before doing such actions!” Also Read – Trending South News Today: Ajith’s look in AK61, Deepika Padukone-Prabhas’ issues on Project K sets, Pushpa 2 deets and more 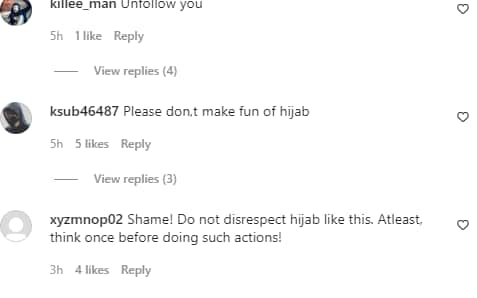 Mandini is facing a lot of criticism. Also Read – BTS: V aka Kim Taehyung spills the beans on conversation with Olivia Rodrigo, Lady Gaga, his solo album and more

Mandana has often been in controversies for some or other reasons. She last appeared in Ekta Kapoor’s show Lock Upp hosted by Bollywood actress Kangana Ranaut and even there she managed to create a stir with her presence. While the show had a concept of jail and the jailor was Karan Kundrra. In one of the episodes Karan and Mandana indulged into heated argument where she was asked to leave the show by Karan.

Karan had slammed Mandana for playing a woman card, ” I will not let anybody to use this stupid woman card when its not necessary. This is 2022 India madam.” Karan was even lauded to stand strong against a woman. Later she apologised to him and things were sorted . Mandana is an Iranian actress who came to Bollywood to try her luck. She was seen in Bhaag Johnny. While she even was a part of Salman Khan‘s show Bigg Boss 9 in 2015 where she was the second runner up.