Rashmika Mandanna defies an ‘uncomfortable’ dress to pose with the paps, netizens end up feeling sorry for the Pushpa actress

After the massive success of Pushpa, Rashmika Mandanna has already started making waves in the industry. Even before her Bollywood debut, Rashmika has been making her presence felt. She was recently spotted wearing a red hot dress at an event which was attended by the who’s who of Bollywood. Instead of being praised, netizens ended up feeling sorry for the Pushpa actress for being visibly uncomfortable in her short dress. Also Read – Trending South News Today: Maaveeran first look video, Ram Charan’s wife Upasana clarifies ‘not having kids’ statement and more

Rashmika looked drop-dead gorgeous as she posed in a figure-hugging thigh-high length dress. Boasting a deep V-neck, and an accentuated fabric from her waist. Letting the outfit do all the talking, Rashmika went minimal with her accessories. She opted for simple yet effective pair of hoop earrings to go with her ensemble. The makeup was flawless and kept in neutral tones. Also Read – Koffee With Karan 7: Sara Ali Khan-Kartik Aaryan, Vijay Deverakonda-Rashmika Mandanna and more — Celebrity affairs that got CONFIRMED on Karan Johar’s show

As Rashmika posed with the paparazzi, she was seen trying to cover up her legs as she sat on the couch. She also brought the extra cloth of her dress over her knees while posing for photographs. However, netizens were not pleased with her outfit. They wondered why Rashmika wore that dress when she was so uncomfortable to carry it. Some people even went on to say that Bollywood is spoiling her by making her wear such dresses. Also Read – Koffee With Karan 7: Sara Ali Khan drops a bomb about Liger actor Vijay Deverakonda and Rashmika Mandanna relationship

At the red carpet, Rashmika also performed the Saami Saami hookstep and the famous ‘thaggede le’ hand gesture to the audiences. 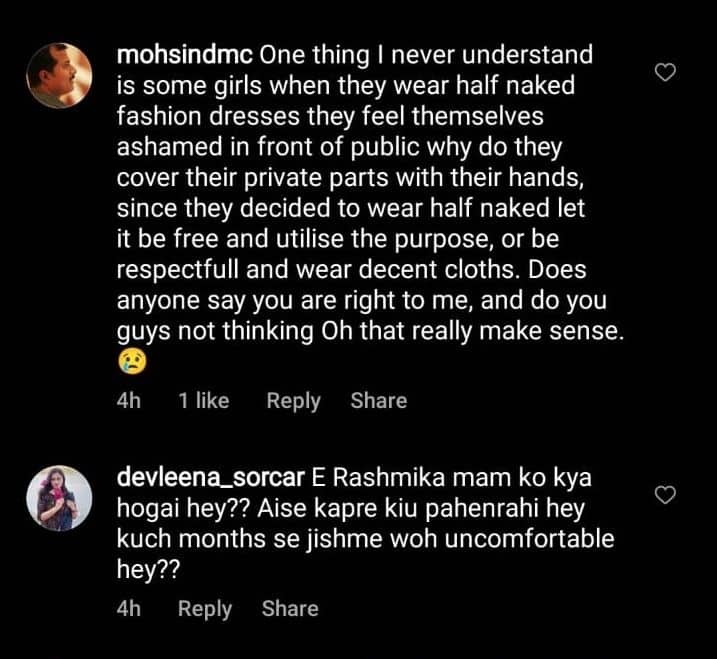 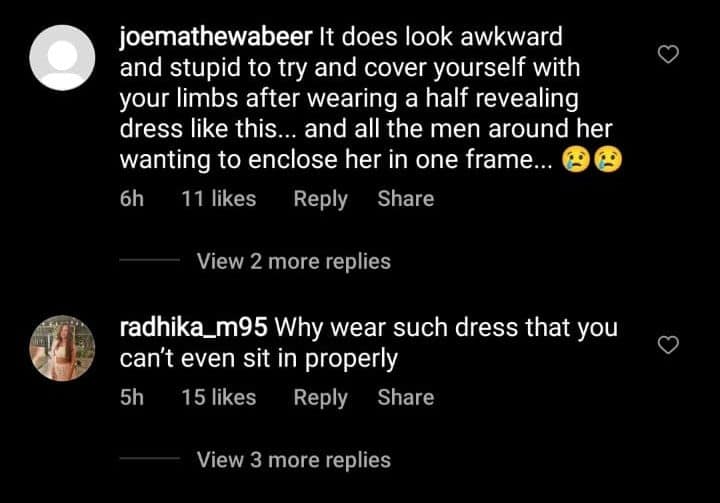 On the work front, Rashmika is all set to make her debut in Bollywood with multiple films in the pipeline including Sandeep Reddy Vanga’s Animal opposite Ranbir Kapoor. She will also share screen space with Sidharth Malhotra in Mission Majnu and Goodbye alongside Amitabh Bachchan.