Shamita Shetty and Raqesh Bapat announce split after months of speculations; request ShaRa fans to support them as individuals

After months of speculations, Shamita Shetty and Raqesh Bapat have announced their split stating that they have not been together for a while. As they publicly called off their relationship, the two requested ShaRa fans to support them as individuals, the same way they have been showering their love upon them when they were a couple. Their breakup announcement came after their mushy pictures from their upcoming music video were being circulated online. Also Read – Trending TV News Today: Nakuul Mehta morphs Ranveer Singh’s nude pic, Divyanka Tripathi Dahiya slams troll for fat-shaming her and more

“Think it’s important to make this clear. Raqesh and I are no longer together and have not been for a while, but this beautiful music video is for all the fans who’ve given us so much love and support. Do continue to shower us with your love as individuals too. Here’s to positivity and newer horizons. Love and gratitude to you all,” Shamita said in her statement. Also Read – Divya Agrawal to Shamita Shetty: TV actresses who broke up with their boyfriends because they saw ‘no future with each other’

Also Read – Raqesh Bapat lashes out at trolls questioning him over his breakup with Shamita Shetty: ‘Can we change our self talk? Is it that difficult?’

Raqesh also took to his Instagram stories and wrote in his statement, “I would like to share with you all that Shamita and I are no longer together. Destiny made our paths meet in the most unusual circumstances. Thank you so much to the Shara family for all the love and support. Being a private person, I did not want to publicly announce parting ways. However, I feel we owe it to our fans to put this out. I am mindful that this will break your hearts but you can continue to shower your love on us as individuals too. Looking forward to all your support. This music video is dedicated to all of you.” 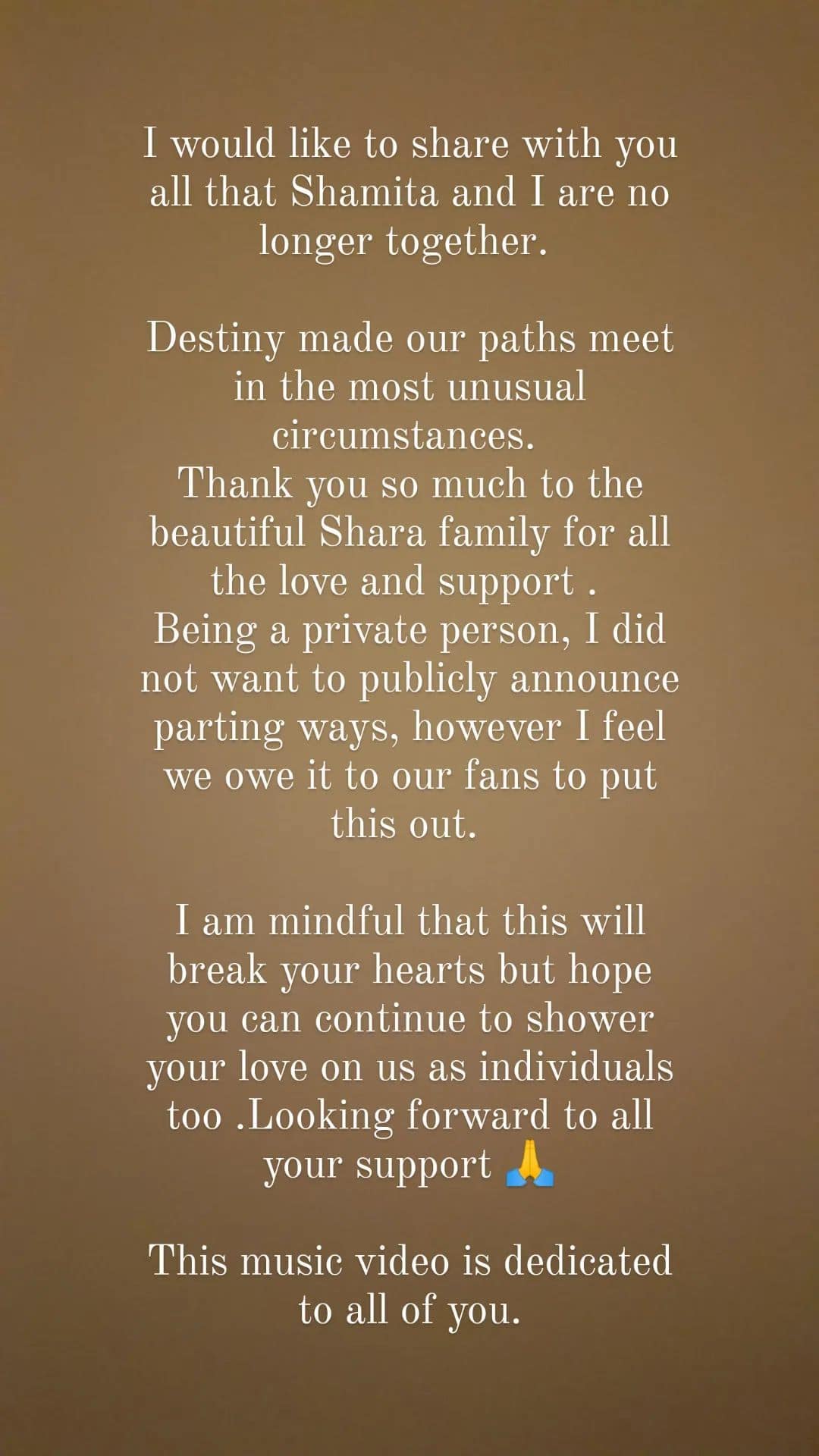 Last month, Bollywood Life had informed you that the couple got separated months back and kept their breakup a secret. While the two parted on a good note and will continue to remain friends, ShaRa fans were heartbroken to see their favourite pair falling out of love. A few weeks ago, Shamita had shared a quirky post on her Instagram page and spoke about the ‘breaking up’. “Even the best of relationships end!” she had written.