Sonakshi Sinha steps out in a sexy red-hot gym co-ord set; gets needlessly TROLLED for her weight [View Reactions]

As Sonakshi Sinha and Zaheer Iqbal continue to set tongues wagging over their rumoured romance, the actress seems to be enjoying the best days of her life, finding herself in a relaxed space both professionally and personally. While the media is constantly hounding her these days for any miniscule dope about her personal life. Sonakshi Sinha doesn’t care two hoots about indulging anyone as is her prerogative. Instead, she’s slaying it like a boss with her appearances, mostly off screen, these days. Also Read – BTS: Kim Taehyung or Jungkook – which Bangtan Boys’ ending fairy challenge at Music Bank did you love the most? Vote Now

Sonakshi Sinha looks hot yet get needlessly trolled for her weight

Recently, the Dabangg girl stepped out in a figure-hugging, ultra-sexy, red-hot, gym co-ord set, looking drop-dead gorgeous. However, social media has turned into such a vile, insidious space, that it seems the majority of netizens just can’t seem to find anything positive anymore, and are simply on the lookout to spew bile. Check out her pictures below for yourself and then the comments underneath it to see how trolls were simply waiting to pounce to spread hate for no reason whatsoever… Also Read – Khatron Ke Khiladi 12: Rubina Dilaik eliminated from Rohit Shetty’s show? This tweet gives a HINT 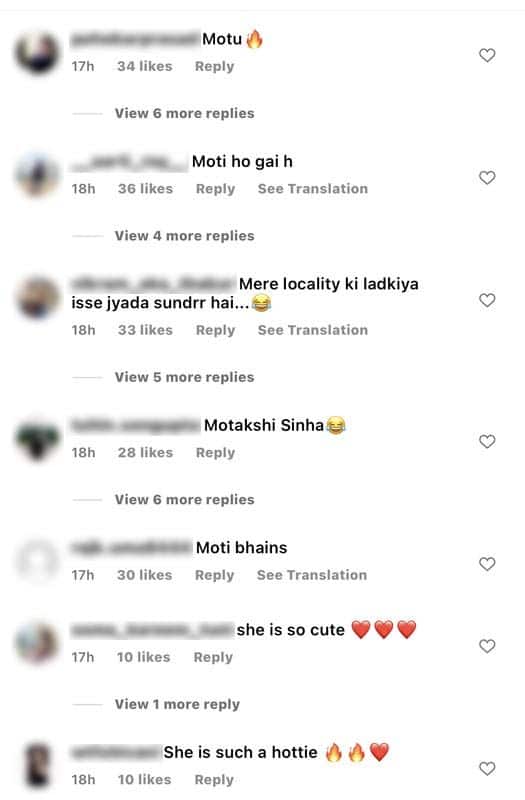 On the occasion of Sonakshi Sinha’s birthday, Notebook actor Zaheer Iqbal wrote: “Happy Birthday Sonzzz Thank You for not killing me I Love You Here’s to a lot more food, flights, love and laughter P.S – This video sums up the entire time we’ve known each other.” No surprises for guessing that it were the words “I Love You,” which grabbed everyone’s attention. Check out Zaheer Iqbal’s Instagram post below:

Zaheer Iqbal’s sister opens up on his relationship with Sonakshi

Later, Zaheer’s sister has made a statement about his rumoured romance with Sonakshi Sinha, however, it’s not the kind that sheds any light on the topic. When questioned by ETImes about the same, she simply stated, “I don’t want to comment on this.” So, the nature of her brother’s relationship with Sonakshi and the context in which he write the words “I Love You” still remain much in doubt.